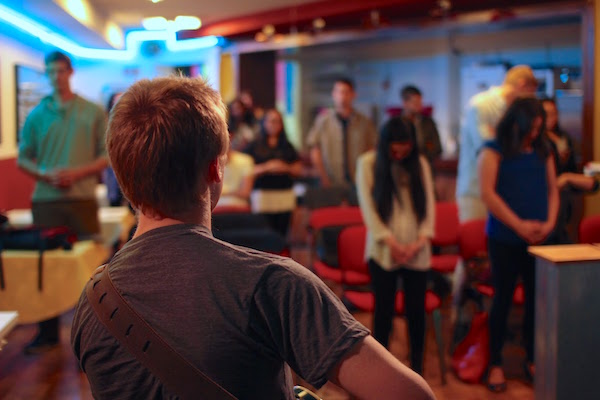 The past few weeks, the challenge we’ve been given as a church is to be faithful. This kind of call may seem minor and is often not welcomed with great cries of “Woop! Woop!” It is, however, fundamental for the growth of any Christian. This has pushed me to start blogging for own church plant, in French, to encourage us and spur us on. Since it seems some in Newfrontiers at large are interested in knowing how we’re doing, which is very encouraging, instead of translating all that I’ve written, I thought I’d condense it for people who are looking from afar, though they are present in heart and through their prayers. Thank you all for that.

For those who are just tuning in, we planted a church in January 2014 and joined New Ground shortly thereafter. We were meeting out of our flat, and kept growing and packing it out until a neighbour complained about all the noise on my 30th birthday (that was a great moment, not.) which led us to look for a place. God provided very soon with a Spanish church lending us their premises for as long as we needed. We really have seen God’s favour in all of this. However, ever since we started meeting in this new place, we stopped growing. Maybe the excitement of meeting in a home was gone, maybe our plant of a dozen people already started feeling as though we were an established church (!), but basically, from January until the summer, we plateaued at 15. This was strange to me, as we had seen many friends and even unbelievers showing interest in coming and talking about Jesus, yet there was no fruit that came through by way of conversion. We are still a church of only 20s and 30s, singles, and my wife and I were struggling to do everything, not able to delegate well. Our summer holidays were helpful, as we visited many churches and got encouraged, but as we got back and saw that the church had apparently shrunk (it’s the summer) it was a bit painful.

As I focussed on my own incompetence as a leader after a service, I had a dream in which John Piper appeared. I didn’t manage to get any advice from him because I woke up, but as I lay awake, I heard in my head his voice saying: “God is looking for FAITHFUL men.” God was speaking to me, telling me that skills can be forged over years of faithfulness, but they cannot produce faithfulness. I realised that we really needed to commit to the long haul and tell the church about it, and thinking about it recently, I realised I needed to repent of my attitude towards so many pastors who aren’t “hip” and “missional” enough in many people’s eyes, but have stayed faithful their whole life, and are now getting stick from people just starting out in the ministry!

The following week was Ashburnham 2015 and P.J. Smyth had a word for our church! What a privilege. He quoted Luke 10.1: “After this the Lord appointed seventy-two others and sent them on ahead of him, two by two, into every town and place where he himself was about to go.”

He pointed out that sometimes the Scriptures show God “going ahead” of his people, but in this context, Jesus was sending his disciples ahead of him. P.J. challenged us not to compare ourselves to other situations (the ever-present temptation, especially church planting, all the more so when other plants start around the same time and seem to be more fruitful sooner!), that fruit indeed would come. The ground needs to be ploughed up maybe, we need to keep it up, but He is indeed coming. I noticed, as I looked at the passage, that the following verse is: “And he said to them, “The harvest is plentiful, but the laborers are few. Therefore pray earnestly to the Lord of the harvest to send out laborers into his harvest.”

That is an extremely encouraging verse to receive. Jesus is telling us that the harvest is plentiful, we’ve just got to ask for more people to come, because we might not even have enough manpower (or indeed “womanpower”) to bring it all in! So we’re encouraged that God is going to do great things, even though we don’t see them just yet. We need faith for them, and faithfulness in them.

This point about fruit was drilled home to us last week when my wife and I had decided to enjoy our Geneva bank holiday in Annecy, and ended up spending most of it in standstill traffic. It was pretty horrid and we were trying our hardest to worship, pray, read, talk all the while staying on the road. It was awful. Once we got through our final big traffic jam, we picked up a couple of hitchhikers, one of whom was a Christian and is going to visit our church on Sunday! Thinking about this, I felt it was a lived parable. We might be tempted to get off the main road when nothing seems to be going forward, but instead, by keeping the course, through the slow bits, praying and worshipping through them, fruit will come, and it will be 1) unexpected, 2) surprising and 3) glorious.

The whole experience has led me to think about the Scriptures’ teaching on faithfulness through the small things.

And Zechariah 4:10: “For whoever has despised the day of small things shall rejoice, and shall see the plumb line in the hand of Zerubbabel.” God is speaking about David’s descendant, Zerubbabel, who has started the temple’s reconstruction and of the future, when it shall be completed with the “top stone” (v.7).

This top stone, Jesus, Son of David, is the foundation of God’s new temple, and the cornerstone (Matthew 21:42). Who despised the day of small beginnings? Not Jesus. An unimpressive groupe of disciples followed him for three years, then completely abandoned him at the moment of his crucifixion. He started his salvific mission in a tiny province of the Roman Empire! However, God has since then made great things from that.

“These seven are the eyes of the LORD, which range through the whole earth.” God declares that His eyes scan the whole world, knowing every detail of what goes on, even when God’s people is a small people group stuck in the Middle-East, in Zerubbabel’s time. His eyes are seeking faithful men and women, and He sees those who respond to His call.

So if you’ve made it this far in this post (following ones will be much shorter I hope!), please join us in prayer that God doubles our numbers by Christmas (bringing other leaders, converts, older people, spouses for our singles!), that our church members would be sold out for our mission and that God does amazing things in our lives, miracles and healing, Kingdom stuff! Thank you all for your prayers and encouragement! We are privileged to be part of this wonderful family of churches!